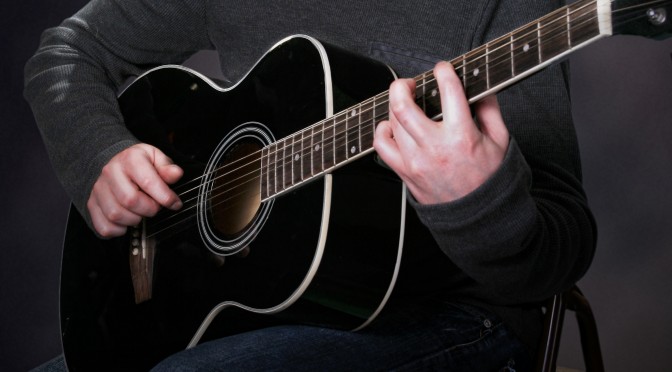 When you’re first starting out learning how to play the guitar, it can be quite frustrating to stay motivated. It’s practicing the same chords, the same strumming and fingerpicking patterns, the same scales and songs over and over. It’s also pretty hard to impress your friends or girls with your noob skills, so ultimately you end up playing by your lonesome.

To help you stay on track on your journey to becoming a killer guitar hero and keep you motivated, what you need is an addition to your repertoire: classic, awesome-sounding and recognizable riffs that will surely make you sound like an advanced player (and you’re on your way to being just that!). By learning to play these easy riffs, you’ll be able to play “real” music in a shorter span of time, and you’ll love playing and practicing more.

Learning these riffs will help you get better at playing guitar quickly and earn the admiration of your peers.

Teach yourself to read guitar tabs and focus on learning one riff at a time. Once you’ve mastered the riffs, you can learn the songs in their entirety. Here are five of the most popular beginner licks to get you started!

“Smoke on the Water” – Deep Purple

This is the easiest riff to do because it uses only one string. Ritchie Blackmore, Deep Purple’s guitarist, came up with the riff, and it was the first backing track to be laid down for the Machine Head album. Lead vocalist Ian Gillan wrote the lyrics for it, inspired by a fire that happened just days before the recording sessions.

Another easy, yet more contemporary riff, this one uses only one string like “Smoke on the Water.” Jack came up with the riff during soundcheck for a show in Melbourne, and he once said that he planned to use the main riff for a James Bond movie theme should they get asked. Deciding that would be unlikely, he used it for “Seven Nation Army” instead.

The riff of “Day Tripper” sounds tricky, but it’s actually easy to learn. John Lennon came up with the main riff and it’s been played live by George Harrison, with Paul McCartney syncing perfectly on the bass. So when you play this riff, you can imagine yourself playing with the band, and that is pure awesome.

You can’t get no satisfaction from playing the guitar unless you learn this riff! Keith Richards came up with this three-note guitar riff on acoustic guitar, recording a rough version of it in his hotel room before falling back to sleep after two minutes. The now-famous riff opens and drives the song.

Guitarist Ed King said the riff came to him one night in a dream, and we hope something like that happens to us too. Ed played the riff over and over to lead vocalist Ronnie Van Zant, who would come up with a verse and a chorus moments later. The instantly recognizable riff made the song a hit back in 1974, and we’re still listening to it today and playing it ourselves.

This article was produced by Nicky from KnowYourInstrument.com