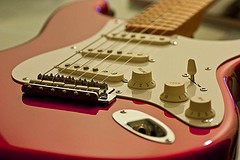 One of the first things you need to get to grips with when learning to play guitar is scales. You’ll have to get your head around the minor scales, the major scales and so on.

If the thought of this makes you feel queasy, don’t worry! We’ll give you five simple tips to making the most of practicing scales. 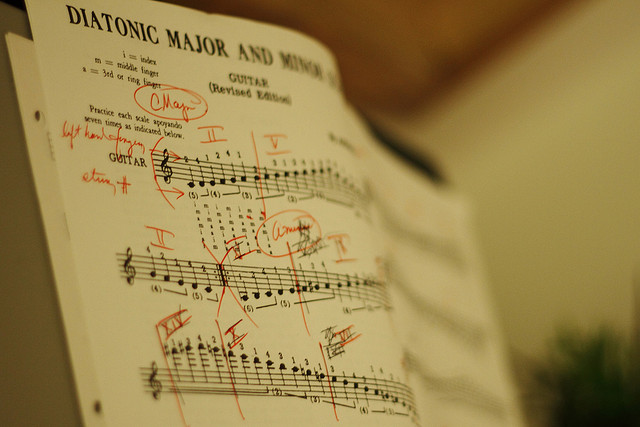 Guitar scales will take some time to learn. Image courtesy of Michael Mooney, CC BY 2.0, via Flickr.

The first tip is a bit obvious one, but it’ll make rest of the learning process so much easier. You simply need to memorise the scales.

When you are memorising the guitar scales, start from the easier ones first. For example, the minor pentatonic scale is relatively easy to learn. Once you learn the most common scales, you can move onto the harder stuff.

Tip 2: Play By Ascending and Descending

You can also practice your guitar scales by trying to play the different scales ascending and descending, i.e. up and down.

You could do this practice while usinga metronome. But it to a simple 4/4 beat and play the different scales first going up and then going down. Try to do this so that you don’t stop at all in the middle or when switching direction.

If you can do this for five times in a row, you’ve clearly mastered the specific scale!

It’s easy to get used to the ascending and descending cycles of the scale. That’s why you should occasionally mix it up by suddenly changing direction.

You don’t need to do it as fast as you do the up and down order, but keep upping the tempo as you progress.

For example, play three notes up from the first, go two notes down, go four notes up, go two down, go three up and so on. The key is to just occasionally change the direction.

This way you mix your scale pattern, improve your finger technique and learn a bit more about rhythm as well.

Finally, you should start playing the notes of a specific scale in different order. If you have a friend, he/she could give you a different note to play and so on.

You could also go through the scale in your head and just skip a note every once in a while. It is OK to play the notes slowly at the start, as the most important part is just to keep playing the right note from the right scale.

The key is to make sure you play from a specific scale, but to play the notes in random order. If you don’t remember the scales well yet, don’t try the random order – mistakes will just confuse you.

Guitar scales will take some time to learn, but once you master them, the opportunities for song choices are endless!

Add the above tips to your guitar lessons and you’ll have more fun learning the scales.