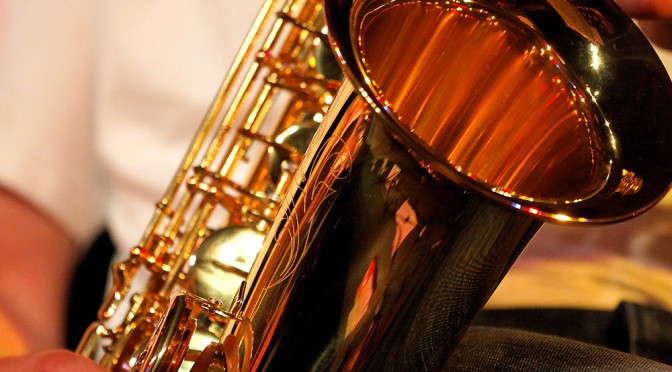 The blues and the saxophone go hand-in-hand, but mastering the techniques of the blues scale can take practise and patience. The blues scale is an excellent tool for improvisation and is a great stepping stone to creating your own compositions. It also enables you to play with other musicians without the need to be following a score, just stick to the rules of the scale and you will all be playing in harmony.

For this example we are using the blues scale in the key of C. From the C, move up a minor third to E♭. Practice keying between these two notes. You will need to use the octave key if you are starting at the C above middle C. Have a go at playing a slow trill between the notes.

The next three notes are a cluster of semitones, F, F# to G. Again using this cluster of three notes have a go at playing them forwards and backwards, in swung, straight or triplet rhythms. If you are playing triplets, try say the word “bicycle” in your head to help you to get an equal note length for each note.

Your final note of the scale is the B♭ before you move to the key note of C. Practise moving between the two keys. This will help you to improve your saxophone playing quickly.

Joining up the notes

Blues scales don’t need to be practiced in the same conventional way that you would practise a major and minor scale. Although it is useful to play this scale ascending and descending over an octave or two, you can practise playing different sections of these notes and it will be just as effective. Practise putting the first five notes together, or instead, start your scale at a B♭. You don’t always need to start the scale on the tonic note. Use your music practise space to experiment with bigger intervals too, for instance keying between the E♭ and the B♭.

Playing the blues with others

If you are playing the blues with others, don’t forget that you may need to be playing in different keys. The tenor saxophone plays a tone above concert pitch. So if your friend is playing a C on on the piano or guitar, you will need to play a D. The alto saxophone players will be playing an A if a C is played at concert pitch. This means that if your friend is playing the blues scale starting on C and you are playing alto sax, you will need to begin your blues scale on A, using the same tonal intervals between the notes.
Most of all when you are learning this new technique, be patient with yourself. Once you have mastered the scale, it is always useful to practise with a backing track so that you can test out your rhythms in time with a beat. This way you’ll improve quickly and soon be mastering some great improvisations around the blues scale.